More than 70 years since atomic bombs were used on the Japanese cities of Hiroshima and Nagasaki, the Nobel committee sought to highlight ICAN’s tireless non-proliferation efforts.

The decision sent a strong message to US President Donald Trump, who has threatened to tear up a 2015 deal curbing Iran’s nuclear programme and who last month alarmed delegates at the UN General Assembly by warning he may be forced to “totally destroy” North Korea over Pyongyang’s nuclear programme.

ICAN “is receiving the award for its work to draw attention to the catastrophic humanitarian consequences of any use of nuclear weapons and for its ground-breaking efforts to achieve a treaty-based prohibition of such weapons,” said Norwegian Nobel committee president Berit Reiss-Andersen in announcing the prize in Oslo.

“We live in a world where the risk of nuclear weapons being used is greater than it has been for a long time,” she said.

Founded in Vienna in 2007 on the fringes of an international conference on the nuclear non-proliferation treaty, ICAN (the International Coalition to Abolish Nuclear Weapons) has mobilised campaigners and celebrities alike in its cause.

It was a key player in the adoption of a historic nuclear weapons ban treaty, signed by 122 countries in July. However, the accord was largely symbolic as none of the nine known world nuclear powers signed up to it.

The coalition of hundreds of NGOs says its main objective is the adoption of an international treaty banning nuclear weapons, along the lines of earlier agreements forbidding the use of biological and chemical weapons, landmines and cluster munitions.

“A global ban on nuclear weapons is long overdue,” the organisation says on its website.

Despite July’s success, ICAN is not resting on its laurels.

“I can imagine a world without nuclear weapons, and I support ICAN,” reads a message from the Dalai Lama on the site.

Actor and activist Martin Sheen meanwhile suggests that “if Gandhi and Martin Luther King Jr were alive today, they would be part of ICAN.” 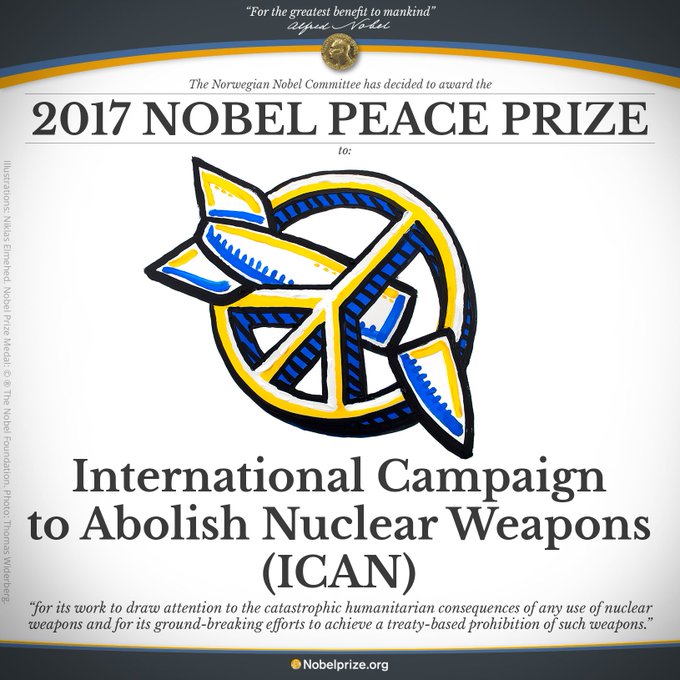 Friday’s award — the climax to a week of prize-giving honouring the world’s leading lights in fields from physics and medicine to literature — comes as another non-proliferation deal, Iran’s 2015 accord with world powers, is under increasing pressure from Trump.

The US leader has threatened to bin the Iran nuclear agreement altogether, saying Tehran is developing missiles that may be used to deliver a nuclear warhead when the deal’s restrictions are lifted in 2025.

He is due to report to Congress by October 15 on whether Iran is still complying with the deal and whether it remains in US interests to stick by it.

Tensions between the US and North Korea, which has test-fired two missiles over Japan and conducted a string of apparent underground nuclear tests this year, have raised the risk of a nuclear confrontation to its highest level in decades.

“This year’s Peace Prize is also a call upon these states to initiate serious negotiations with a view to the gradual, balanced and carefully monitored elimination of the almost 15,000 nuclear weapons in the world,” said Reiss-Andersen.

More than 300 people and organisations were thought to have been nominated for this year’s Peace Prize, including the UN’s refugee agency UNHCR, Syria’s White Helmets rescue service and Congolese doctor Denis Mukwege.

The Peace Prize, which comes with a golden medal and a cheque for nine million Swedish kronor (943,000 euros, $1.1 million) will be presented in Oslo on December 10, the anniversary of the death of its founder, Swedish businessman and philanthropist Alfred Nobel.