Rights groups have warned the island might not be able to withstand violent storms during the annual monsoon season.

Bangladesh’s refugee commissioner has said thousands of Rohingya living in Bangladesh refugee camps have agreed to move to an island in the Bay of Bengal despite fears the site is prone to flooding.

Some 740,000 Rohingya fled Myanmar in August 2017 in the face of a military crackdown, joining 200,000 refugees already in makeshift tent settlements at Cox’s Bazar.

Dhaka has long wanted to move 100,000 refugees to the islet, saying it would take pressure off the overcrowded border camps where almost a million Rohingya live.

“Approximately 6,000 to 7,000 refugees have already expressed their willingness to be relocated to Bhashan Char [the island],” the Bangladesh official Mahbub Alam told AFP news agency from Cox’s Bazar, adding that “the number is rising”.

He did not say when the refugees would be moved, but a senior Navy officer involved in building facilities on the island said the relocation could start by December, with some 500 refugees sent daily.

Bangladesh had been planning since last year to relocate Rohingya to the desolate flood-prone site, which is an hour by boat from the mainland.

Rights groups have warned the island, which emerged from the sea only about two decades ago, might not be able to withstand violent storms during the annual monsoon season.

Residents from nearby Hatiya Island told Human Rights Watch the island was not habitable.

“Part of the island is eroded by the monsoon every year,” said one man. “In that time, we never dare go to that island, so how will thousands of Rohingya live there?”

In the past half century, powerful cyclones have killed hundreds of thousands of people in the Meghna River estuary where the island is located.

Rohingya leaders would be taken to Bhashan Char to view the facilities and living conditions, Alam said.

Safety facilities built on the island include a nine-foot (three-metre) high embankment along its perimeter to keep out tidal surges during cyclones, and a warehouse to store months worth of rations, he added.

A Rohingya father-of-four Nur Hossain, 50, said he and his family agreed to relocate to Bhashan Char after they were shown video footage of the shelters. 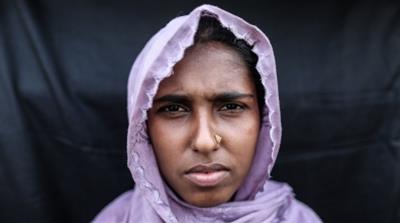 100 Faces of the Rohingya

“I have agreed to go. The camp here [at Leda] is very overcrowded. There are food and housing problems,” the 50-year-old told AFP.

There was no immediate comment from the UN, although Bangladeshi officials said they expected a delegation would visit the island in the next few weeks.

Bangladesh and Myanmar signed a repatriation deal two years ago, but virtually no refugees have returned to date, with UN investigators describing conditions in Myanmar as “unsafe, unsustainable and impossible”.

Nearly 3,500 Rohingya in Bangladesh in August refused a United Nations-led bid to repatriate them to Myanmar over safety concerns.

The refugees were cleared for repatriation following a joint exercise led by the UN High Commissioner for Refugees (UNHCR) and the Bangladesh government.

Myanmar refuses to recognise the Rohingya, a mainly Muslim minority who live primarily in Rakhine state, despite having lived there for generations. They have been denied citizenship and are rendered stateless.

A UN report last month said Rohingya remaining in Rakhine state faced a “serious risk of genocide”, warning that the repatriation of a million others remains “impossible”.

Erdogan says up to 250,000 people fleeing from Syria’s Idlib towards Turkey