Cheers, tears, prayers for 2020: A new decade is ushered in

Revelers around the globe are bidding farewell to a decade. Here are highlights from celebrations in New York, Dubai, Rio de Janiero, Paris, and London. 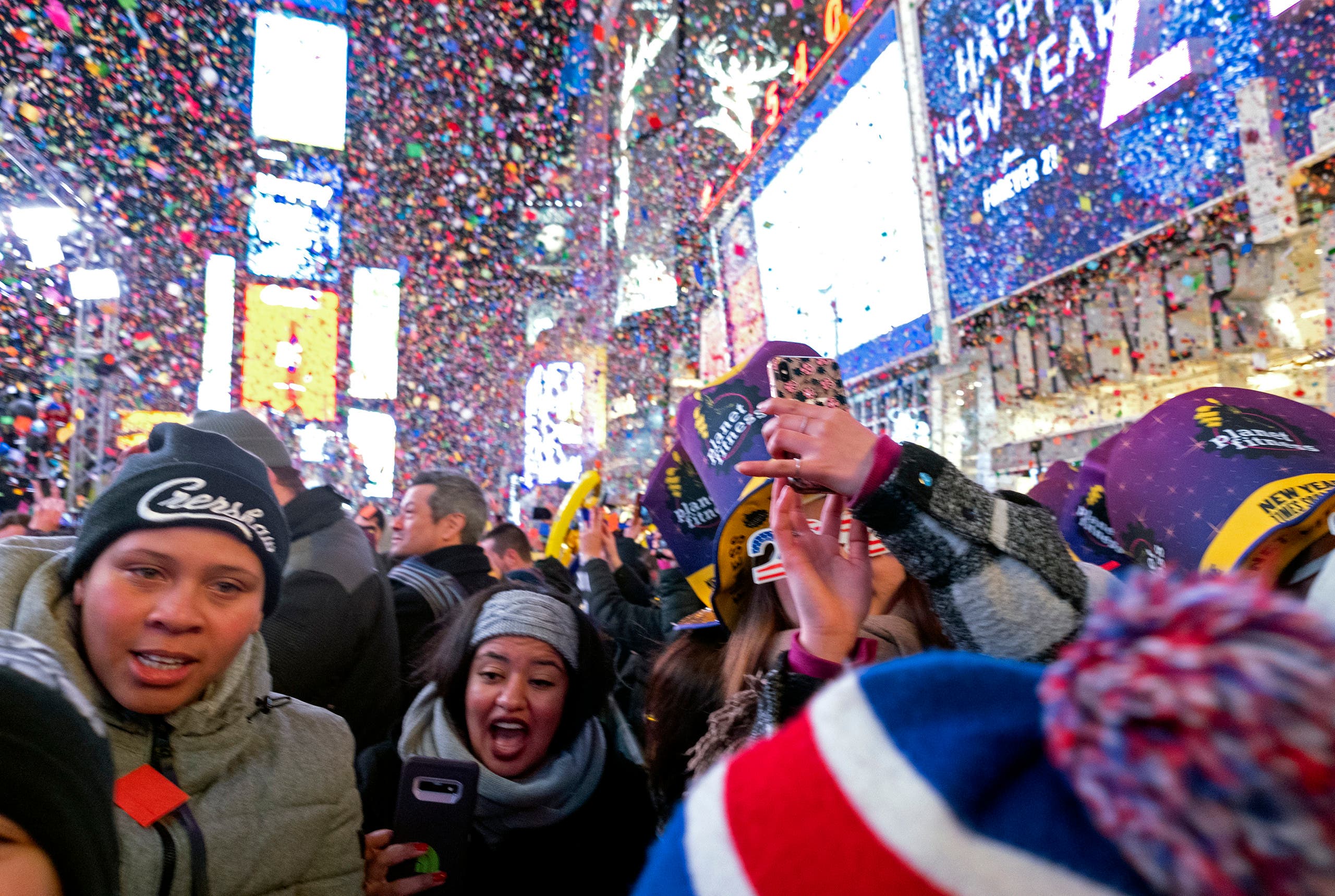 Fireworks burst and confetti fell as throngs of revelers cheered the start of 2020 in New York City’s Times Square.

In one of the globe’s most-watched New Year’s Eve spectacles, the crowd counted down the last seconds of 2019 as a luminescent crystal ball descended down a pole.

About 3,000 pounds (1,360 kilograms) of confetti showered the sea of attendees, many of whom were also briefly rained on earlier in the evening as they waited in security pens for performances by stars including rap-pop star Post Malone, K-pop group BTS, country singer Sam Hunt and singer-songwriter Alanis Morissette.

“It was a dream, I wanted to do it so this year a lot of people helped me to get here so I’m here, and I’m thankful for that,” said Mariemma Mejias, 48, who flew to New York for the festivities from San Juan, Puerto Rico. 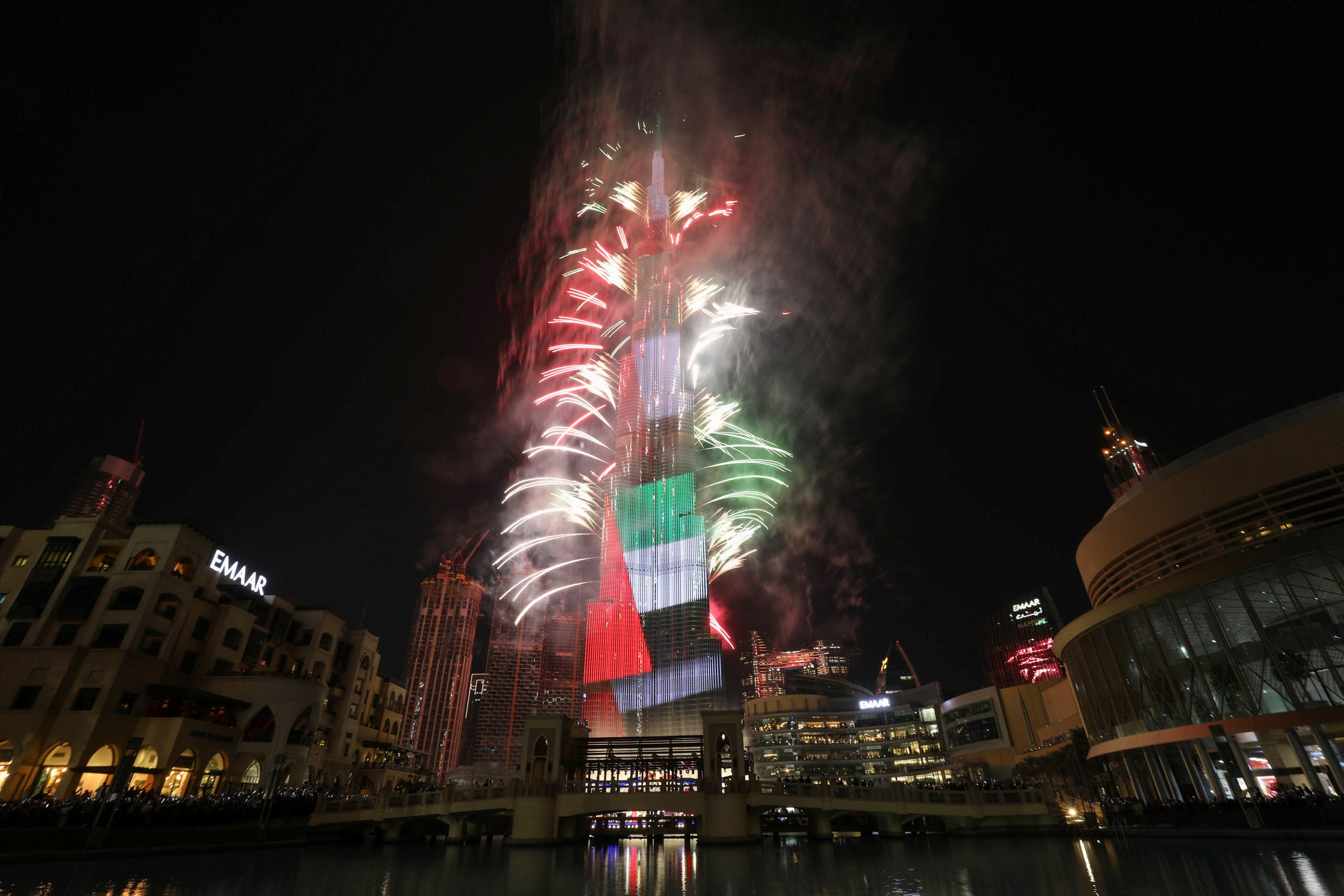 Fireworks explode around the Burj Khalifa, the tallest building in the world, during New Year’s celebrations in Dubai. (Photo: AP)

For nearly 10 minutes, fireworks lit the sky over Dubai’s Burj Khalifa, the world’s tallest building, as hundreds of thousands gathered downtown to watch the spectacular display.

The New Year’s Eve display at the 828-meter-tall (2,716-foot-tall) skyscraper was just one of seven different fireworks shows across the emirate. Tourists, especially from Europe and Russia, flocked to the sunny beaches of Dubai at this time of year to escape the cold, dark winter.

Dubai this year will be hosting Expo 2020, a world fair that brings the most cutting-edge and futuristic technologies. 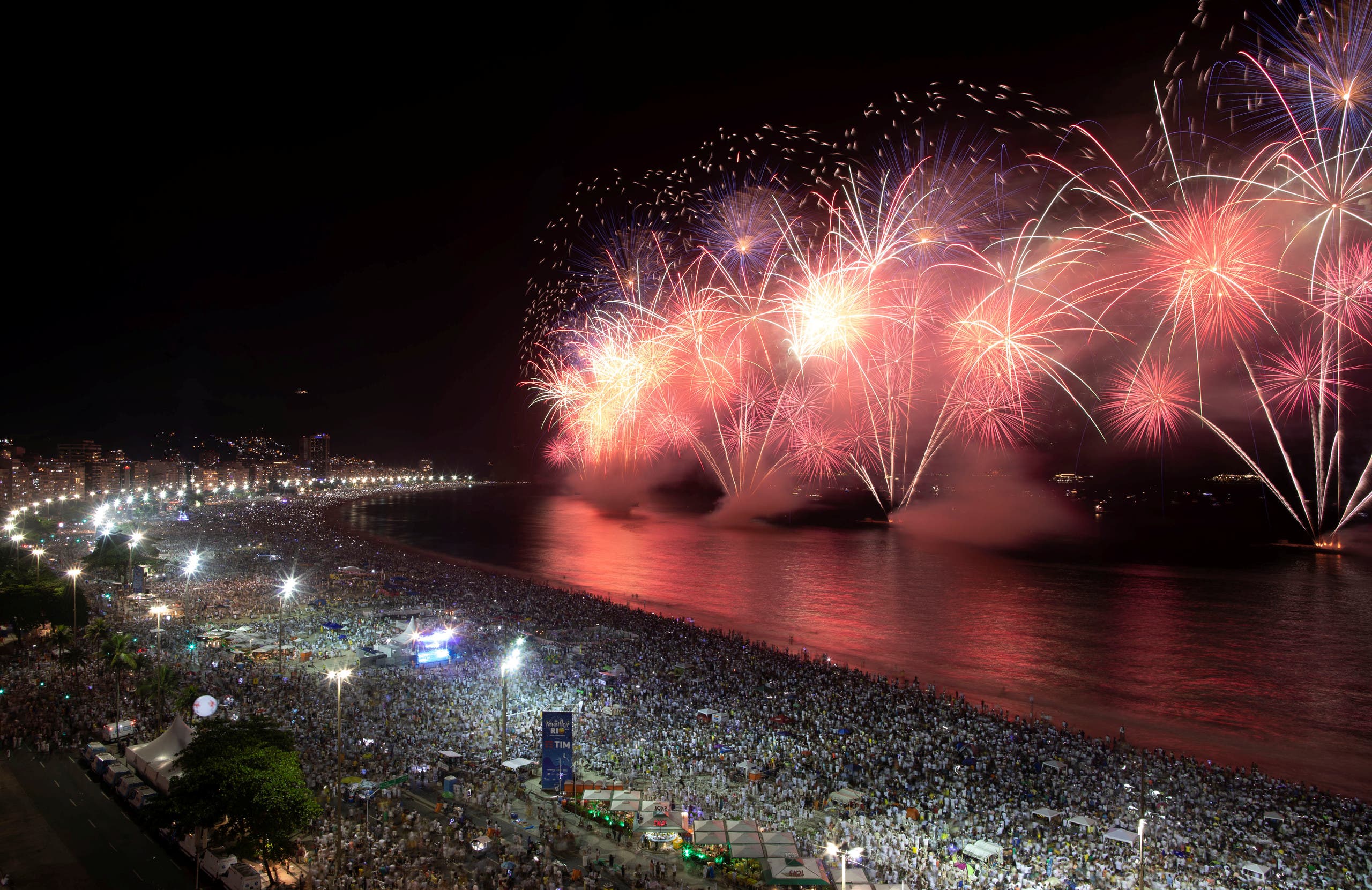 About 3 million people welcomed 2020 at Brazil’s iconic Copacabana beach as almost 34,000 pounds (15,420 kilograms) of colorful fireworks went off for 14 minutes after midnight.

Rio de Janeiro holds one of the biggest New Year parties in the world, with music, drinks and religious rituals on the shores. Many dress in white in a traditional sign of their hope for peace.

Many locals and tourists are expected to stick around Copacabana until Wednesday’s sunrise for their first dip of the year in the ocean, expecting to wash away their troubles from 2019. Summer in Rio often brings high temperatures early on. 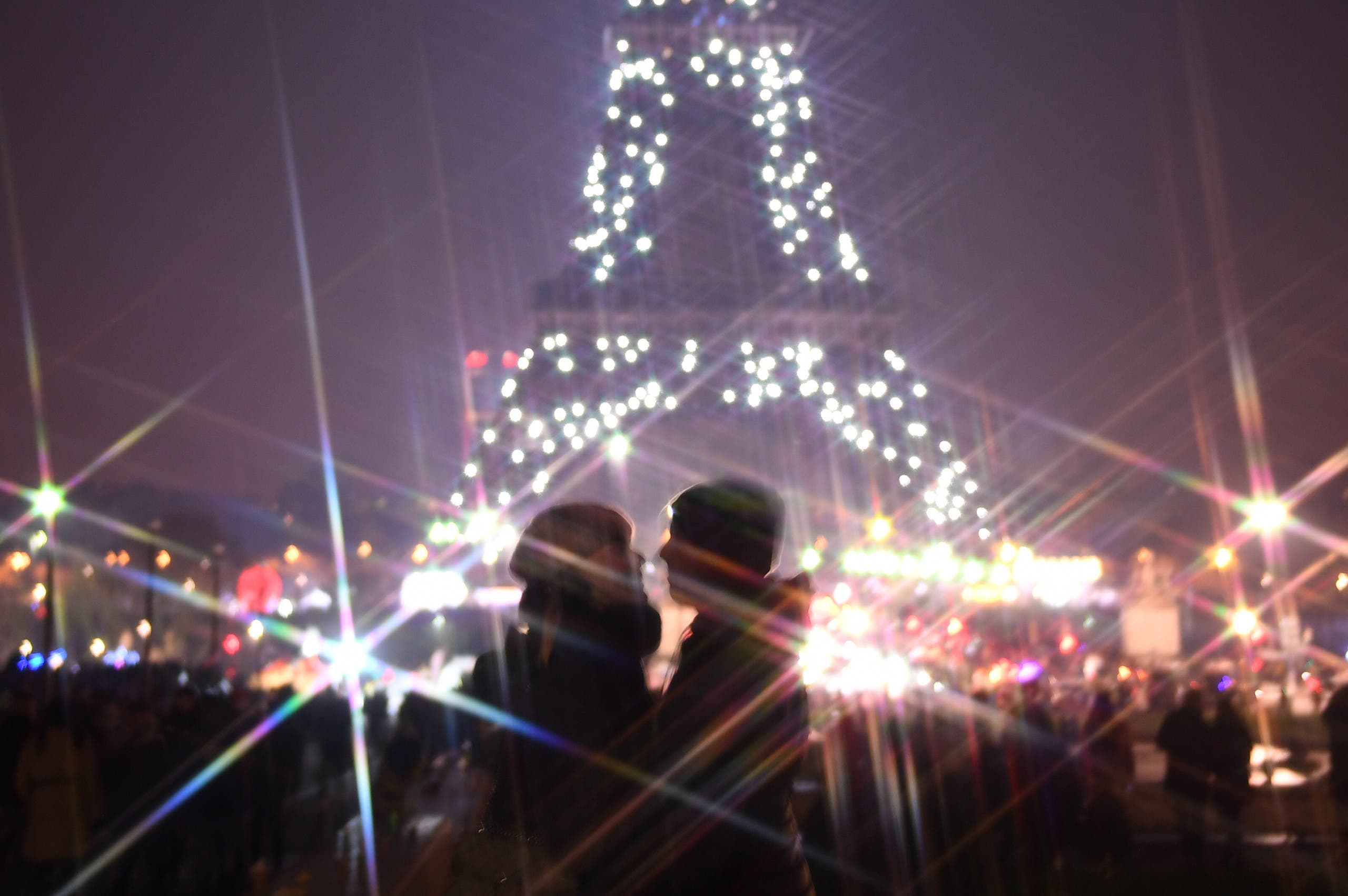 A couple in front of the Eiffel tower during the New Year’s celebrations in Paris. (Photo: AFP)

A joyful crowd of Parisians and tourists walked, biked and used scooters to reach the Champs-Elysees for the new year celebrations, in a city with almost no public transport amid massive strikes.

Revelers converged at the famous avenue to watch a light show at the Arc de Triomphe, followed by a fireworks display at midnight. Paris police set up a security perimeter around the Champs-Elysees area with a ban on alcohol and traffic restrictions. 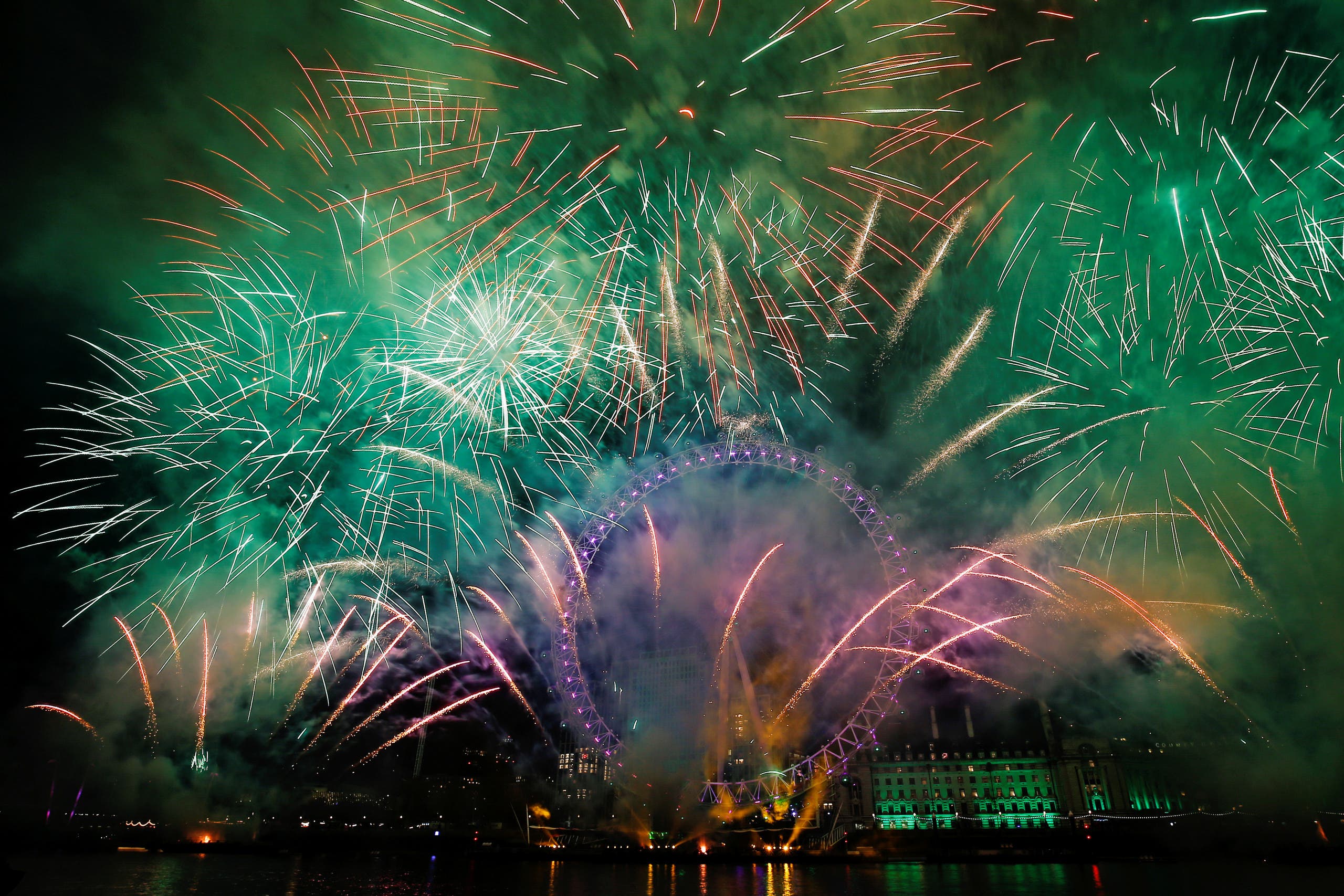 Londoners watched a spectacular fireworks display from the banks of the River Thames that was launched from the London Eye and barges near Parliament.

The familiar chimes of London’s Big Ben clock tower rung in the new year, even though they have been silent for most of 2019 because of extensive restoration work.

To the north, the multi-day Hogmanay New Year’s celebrations in Edinburgh began Monday night with a torchlight parade through the streets of the Scottish capital.