Delhi remains on edge after a third consecutive night of rioting, with reports of Muslim homes and shops being targeted by violent mobs.

Twenty-three people have been killed so far in the deadliest violence the Indian capital has seen in decades.

The clashes first broke out on Sunday between protesters for and against a controversial citizenship law.

But they have since taken on communal overtones, with reports of many Muslims being attacked.

Photographs, videos and accounts on social media paint a chilling image of the last few days – of mostly Hindu mobs beating unarmed men, including journalists; of groups of men with sticks, iron rods and stones wandering the streets; and of Hindus and Muslims facing off.

Access to these areas was severely restricted on Tuesday, when most of the violence took place. Judging by the names released so far, both Muslims and Hindus are among the dead and injured.

The Delhi High Court, which is hearing petitions about the violence, has said it cannot let “another 1984” happen on its “watch”. In 1984, more than 3,000 Sikhs were killed in anti-Sikh riots in the city.

Prime Minister Narendra Modi tweeted on Wednesday, three days after the violence broke out, appealing for peace. He added that he had reviewed the situation and police were working to restore normalcy.

Opposition leader Sonia Gandhi has called for the resignation of Home Minister Amit Shah, saying he is “responsible” for the violence.

The unrest is centred around Muslim-majority neighbourhoods – such as Maujpur, Mustafabad, Jaffrabad and Shiv Vihar – in north-east Delhi.

The streets in these areas are littered with stones and shattered glass, broken and burnt vehicles are strewn about, and the stench of smoke from smouldering buildings fills the air.

What is happening now?

While fresh clashes have not been reported on Wednesday, the city continues to simmer.

BBC reporters saw Muslim residents in Mustafabad leaving their homes with bags and bundles of their belongings, fearing further clashes. 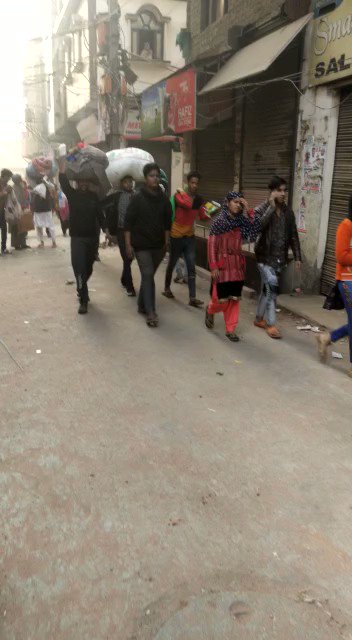 3,273 people are talking about this
Report

Some 189 people are injured, according to officials at the Guru Teg Bahadur hospital where many of them have been admitted.

BBC reporters at the hospital say they saw people with all sorts of injuries, including bullet wounds, scrambling for treatment. They say the hospital seemed “overwhelmed”, and many of the injured were “too scared to go back home”.

Many, including journalists, have tweeted and spoken of mobs demanding to know their religion. At least one photojournalist said he was asked to remove his pants to prove his identity. This has also happened during religious riots in the past to identify Muslims as they are usually circumcised.

A small crowd of around a dozen people is standing outside a vandalised mosque in Ashok Nagar, one of the areas worst affected by the violence.

The front of the green and white building is scorched. An Indian flag and a saffron flag, commonly associated with right-wing Hindu groups, are flying from one of the minarets.

Torn pages from the Koran are strewn outside the building. Two young men are picking up the pages and putting them in a plastic bag.

One man says he will take the pages and bury them in a graveyard.

As I enter the building, I see skull caps and partially burned prayer mats.

The area where the mosque stands is a Hindu neighbourhood, but residents say that they had nothing to do with its desecration.

They blame “outsiders”, saying that they did not intervene as they were afraid of being targeted. 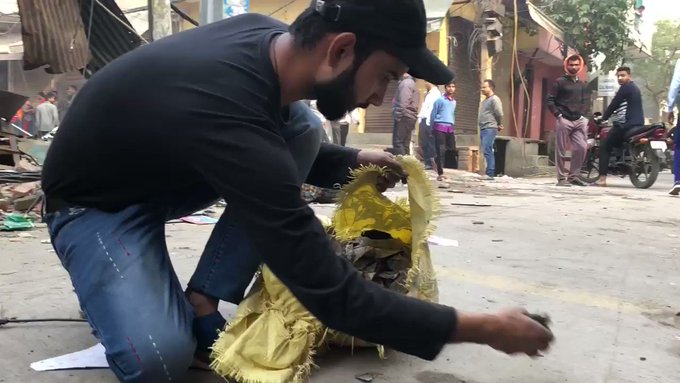 179 people are talking about this
Report

Why did it turn deadly so quickly?

It appears to have started with a threat issued by Kapil Mishra, a leader from the governing Bharatiya Janata Party (BJP), against protesters opposing the citizenship law.

On Sunday, he led a rally in Jaffrabad – and asked people via Twitter – to gather in the area. In his tweet, he told the Delhi police they had three days to clear the protest sites and warned of consequences if they failed to do so.

The first reports of clashes emerged later that day.

Critics say it discriminates against Muslims, while the government denies this, saying it only offers citizenship to persecuted minorities.

But it has sparked huge protests, including those led by Muslim women. Some of these – such as the one in Delhi’s Shaheen Bagh – have become the target of right-wing vitriol.

At least three BJP leaders, including Mr Mishra, have been accused of inciting violence through hate speeches – the Delhi High Court is currently hearing petitions to register a police complaint against them.

What are authorities doing?

There is heavy police presence in the affected areas, and paramilitary troops have also been deployed in an effort to keep peace.

“There are enough forces on the ground and no one needs to fear,” National Security Adviser Ajit Doval told NDTV news channel, and asked the people of Delhi to trust “the man in uniform”.

Mr Doval was responding to reports that police were allegedly not doing enough to help those under attack.

The affected areas are close to the Loni border – that Delhi shares with Uttar Pradesh state – which has now been sealed. Schools in the area have been closed, and year-end exams postponed.

The Delhi police have also been accused of being under-prepared and outnumbered. More than 50 policemen have also been injured and at least one – a constable named Ratan Lal – was killed.

Police spokesman MS Randhawa told reporters on Tuesday that the situation was under control and a “sufficient number of policemen” had been deployed. Paramilitary forces have been deployed as well.

The central cabinet is expected to meet later on Wednesday to review the situation. Home Minister Amit Shah, who is in charge of the city’s police force, led a meeting with officials and policemen on Tuesday night.

The timing of the unrest is being seen as an embarrassment for Prime Minister Narendra Modi as he was hosting US President Donald Trump over the last two days on his first official visit to India.

As the violence escalated, it overshadowed Mr Trump’s visit, making it to national and global headlines.

N Korea fires more missiles than ever amid coronavirus pandemic