Dozens of Rohingya believed to be from one of several boats floating in the Bay of Bengal for weeks have landed on the coast of southern Bangladesh, according to officials, as fears grow over hundreds of people stuck at sea on vessels because of coronavirus restrictions.

Security officials quoted by news agencies said on Sunday that a small boat carrying about 40 people, including “starving” women and children, had come ashore the previous day.

Local people tipped off the coastguard and 29 people were arrested and about 10 fled, police and security officials said.

Chris Lewa, director of the Arakan Project monitoring group, said the group that landed on Saturday had likely come on a small boat from one of the larger vessels still at sea, believed to be carrying hundreds of people.

The two trawlers – carrying an estimated 500 Rohingya women, men and children – were stuck in the Bay of Bengal after being rejected by Malaysia, which has imposed restrictions on all boats in light of the coronavirus pandemic.

Bangladesh has refused to let the fishing boats land on its territory despite United Nations calls to allow them in as a powerful storm bears down on the region.

Shobbir Ahmed, a Rohingya at one of the refugee camps in southeast Bangladesh’s Cox’s Bazar told AFP news agency that two of his daughters who had been on the stranded boats were among those who landed on Saturday.

He said the women, aged 19 and 17, had boarded a trawler two months ago trying to get to Malaysia. Ahmed said he paid a Rohingya intermediary about $2,230 for them to make the trip. 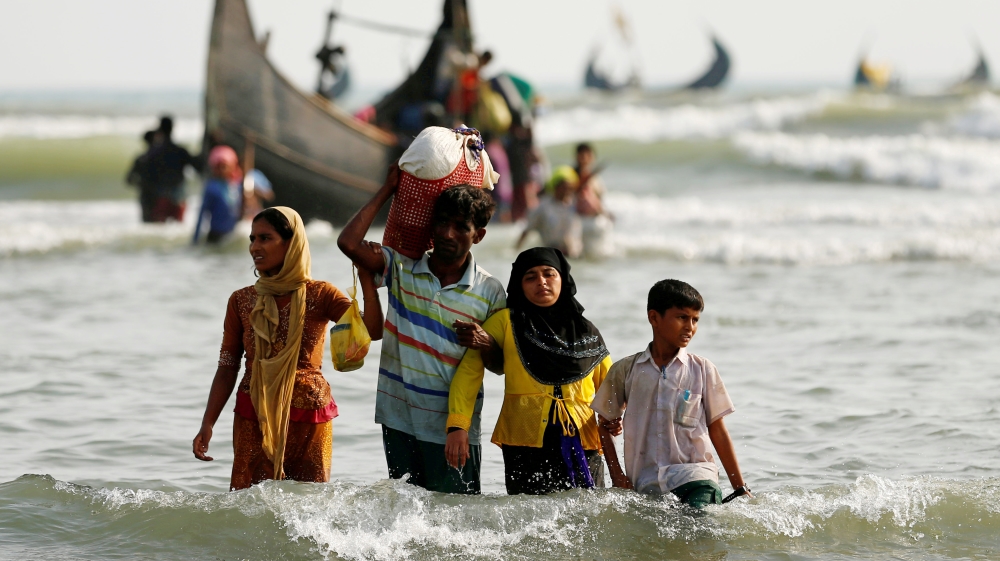 Rohingya refugees walk to the shore with his belongings after crossing the Bangladesh-Myanmar border by boat through the Bay of Bengal in Teknaf, Bangladesh [File: Mohammad Ponir Hossain/Reuters]

Security officials, speaking on condition of anonymity, said the rescued Rohingya would be sent to the island of Bhashan Char in the Bay of Bengal where Bangladesh has built shelters for some 100,000 refugees.

The proposed relocation to the island in the cyclone-prone coastal belt has drawn criticism from rights groups and sparked protests by the Rohingya.

There are about one million Rohingya in camps in Bangladesh, the majority of whom fled a brutal military crackdown in Myanmar in 2017.

Bangladesh Foreign Minister AK Abdul Momen said last month that the country would not allow the Rohingya boats into its territory.

His declaration came after more than 60 Rohingya died on a boat that waited at sea for two months before it could dock.

For years, Rohingya from Myanmar and Bangladesh have fled by boat for Thailand and Malaysia when the seas are calm between October and April. Hundreds died in 2015 after a crackdown in Thailand led smugglers to abandon their human cargo at sea.