How dangerous is the new coronavirus?

The fast spread of a new coronavirus in China has prompted global alarm, with neighbouring states closing their borders, global airlines suspending flights and some governments barring entry to foreign nationals who have recently been to the Asian country.

The rapidly spreading virus, which is thought to have originated in the central city of Wuhan in late December and has since been detected in more than two dozen countries, has infected nearly 60,000 people and killed over 1300 in mainland China. One person in Hong Kong, one in Singapore and another in the Philippines have also died from the virus, known as COVID-19.

In a bid to limit its spread to countries with weak health systems, the World Health Organization (WHO) on January 30 declared the new outbreak a public health emergency of international concern.

The UN health agency initially criticised the international travel curbs and flight suspensions against China, but on February 11 said countries should be “as aggressive as possible” in combating the virus.

So just how dangerous is COVID-19 and how worried should you be?

The simple answer is we do not know enough yet and will not know until more data comes in.

But experts say the key factors are how contagious the new virus is and what proportion of infected people become severely ill.

The new coronavirus is part of a family of viruses that include the common cold and the severe acute respiratory syndrome (SARS), which also originated in

in china 2002 It spreads primarily through droplets dispersed when an infected person coughs or sneezes, and can also be transmitted via contaminated surfaces.

According to Chinese statistics, about 2 percent of people infected with COVID-19 have died so far. In comparison, about 10 percent of the 8,437 people infected with SARS during the 2002-2003 outbreak died, while the Middle East respiratory syndrome (MERS), which originated in Saudi Arabia in 2012, had a fatality rate of about 35 percent.

Seasonal influenza outbreaks, meanwhile, kill less than 0.1 percent of people who fall ill, but as many as one billion people are estimated to catch the flu virus annually. That means between 290,000 and 650,000 people could die from the common cold every year.

However, it may be too early to estimate fatality rates for the new coronavirus as we are still in the early stages of the outbreak.

And, unlike the common cold, the new type of virus has no vaccine and no specific medicine recommended to prevent or treat it.

Another key measure in judging the danger of the new virus is its transmissibility.

According to an analysis published on January 26 by scientists at Harvard University in the United States, each infected person could pass on the new virus to up to three people on average, making it as contagious as SARS.

However, new data since then suggests the virus could be far more infectious – it has spread to more than 28,000 people within weeks of its detection, outstripping the total from the months-long SARS outbreak. 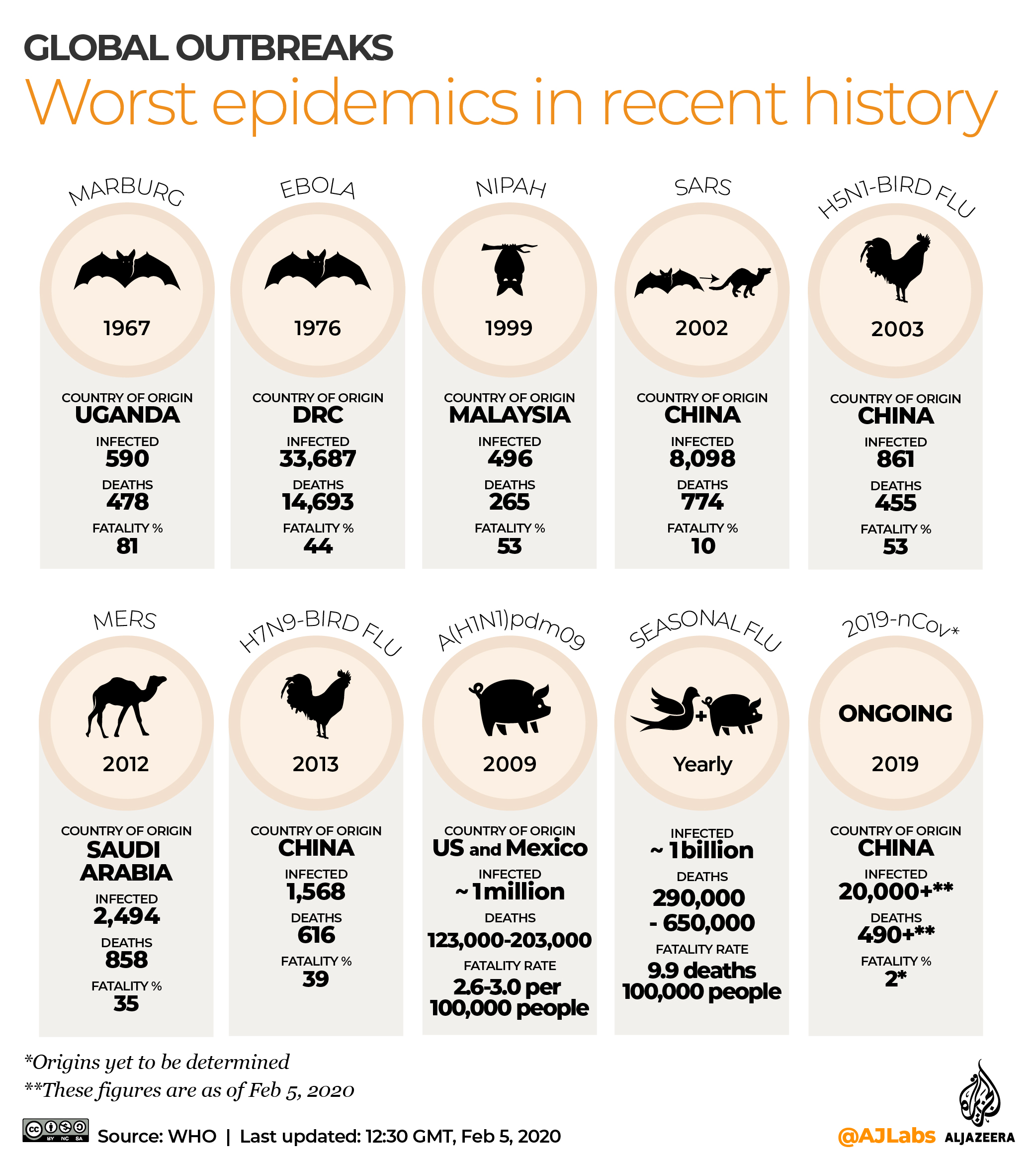 This suggests the risk to most people outside China is low.

Citing preliminary information, the WHO also says the virus only seems to survive on surfaces for a few hours. “Simple disinfectants can kill the virus making it no longer possible to infect people,” according to the agency.

And, while there is still much more we need to learn about how the new coronavirus affects people, it is older people and people with pre-existing medical conditions who are more at risk of becoming severely ill if infected, according to the WHO.

To protect against any viral illness, the global health agency recommends that people wash their hands frequently and avoid touching their eyes, nose and mouth to minimise the risk of transmission. It also recommends covering the mouth and nose with an elbow or tissue while sneezing and coughing, and seeking medical care in case of fever, cough and shortness of breath.

Coronavirus spreads in Middle East and beyond: