Iran Sent Them to Syria. Now Afghan Fighters Are a Worry at Home

YAKAWLANG, Afghanistan — Iran has trained and deployed thousands of Shiite Afghans as shock troops in Syria’s sectarian war. Members of the Afghan unit, the Fatemiyoun Division, wear a shoulder patch recounting words of praise from Iran’s supreme leader as a badge of honor.

What those fighters might do when they come home is now very much on the minds of officials who fear that Afghanistan may become the next great sectarian battleground between Iran, as the declared guardian of Shiites, and Saudi Arabia, long the sponsor of conservative Sunni doctrine around the world.

“This is quite dangerous: What happens to this Fatemiyoun force when the war in Syria is over?” said Rahmatullah Nabil, a former Afghan intelligence chief. “The fear is that rivalry in the region, between Iran and Saudi, will shift to Afghanistan. And I think that clash is already shifting here.”

There is reason for worry. First, there’s a history: The factional divisions that drove Afghanistan’s devastating civil war in the 1990s were seized on by foreign powers who were seeking proxies. And there’s a new concern: A stark increase in attacks against Afghanistan’s Shiite minority, mostly by Sunni extremists loyal to the Islamic State, is already providing Iran a pretext to increase its meddling in the country.

The attacks have received wide coverage in the Iranian news media. And one Fatemiyoun fighter who returned about three months ago from Syria said the violence against Afghan Shiites was a frequent topic raised by their commanders in the Islamic Revolutionary Guards Corps.

The Afghan fighter had returned to his home in Yakawlang, a village in Bamian Province where the Taliban massacred more than 300 Shiites in 2001. Every year, hundreds of residents kneel on the dirt in a hilltop cemetery and beat their chests in mourning for their loved ones, their names listed on a metal sign worn out by time and covered in rust.

“The Guards commanders were saying that, if it comes to it, we will make Bamian into a base for you, a base for Fatemiyoun,” said the returning fighter, who like others interviewed for this article spoke on the condition of anonymity to avoid being singled out for attack.

“There was always talk about that; the commander would say that one day you will go defend in your own country,” said another fighter, who had lived in Iran for 20 years as a refugee before he joined to go to Syria. He said he enlisted after he saw a video of Islamic State fighters “playing football with a chopped head.” His relatives said he joined after a romantic heartbreak.

Iran has long relied more on soft power than armed might in Afghanistan, playing up its cultural, religious and economic influence in western Afghan districts near the border. And though Iran resents the presence of the United States military on its border, it has mostly supported the American-backed administration in Kabul, choosing stability over chaos.

But as the war in Afghanistan has stretched late into a second decade, and with the stability of the central government in question, Iran has begun hedging its bets, American and Afghan officials say. That has extended to improving its ties with the Taliban, a group it had long seen as an ideological enemy.

Afghan officials acknowledge that they have not yet seen evidence that Iran was actively rallying Fatemiyoun veterans. But the officials are deeply concerned that the groundwork is being laid. And statements by Iran’s military leaders, as well as their use of Afghan fighters in other conflicts, suggests that Iran sees the force as an asset in future engagements.

Brig. Gen. Ismail Qaani, the deputy commander of the Quds force within the Revolutionary Guards, recently told a memorial for Afghan fighters that Syria was just a temporary goal in a larger vision. 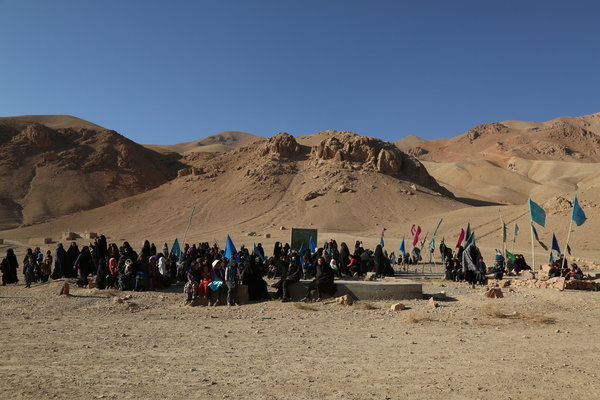 Residents of Yakawlang, in the Afghan province of Bamian, held a mourning ceremony in October to commemorate a Taliban massacre of Shiites there in 2001.
MUJIB MASHAL / THE NEW YORK TIMES

“Fatemiyoun is a new culture — a collection of brave men who do not see boundaries and borders in defending Islamic values,” General Qaani said, as quoted in the local Iranian media.

The war in Yemen is one indication of how Afghans are already being drawn deeper into the Iranian-Saudi rivalry, on both sides. Not only did Iran send smaller units of the Fatemiyoun to cross Syrian borders and fight in Yemen, but at least 1,000 Sunni Afghan refugees from camps in Pakistan have also been recruited to fight on Saudi Arabia’s behalf in Yemen, according to three senior Afghan officials.

The core of what is now the Fatemiyoun Division included fighters from Shiite militias that had Iranian support during the Afghan civil war. Some even went to Iraq to fight on behalf of Iran against Saddam Hussein, or to Lebanon to oppose the Israeli invasion.

Many of the Afghan fighters, mostly recruited from among Afghan refugees or illegal laborers in Iran, join for the salary of about $600 a month, and for the promise of Iranian residency paperwork after a deployment to Syria, which usually lasts three months. But they soon realize that the benefits are designed as a hook: The paperwork needs to be validated every year, and that requires enlisting again.

“Here, I am scared — of the government, of Daesh,” said one former Fatemiyoun fighter who has returned to Kabul, using another name for the Islamic State. “And if I don’t go back to Syria, my Iranian passport will lose validity.”

Afghan officials say the Iranian police have intensified a crackdown on illegal Afghan immigrants, arresting as many as 200 a day. When they arrive at deportation centers, Iranian military officers are there to offer another option.

“They said: ‘You had come from Afghanistan to work, to make money. We give you two options: You go to Syria, and we pay you money. Or you go back to your country,’” said the former fighter in Yakawlang, who asked to be identified only as Jawed. He was detained while working at an Iranian construction site and taken to a deportation center where, out of 200 Afghan detainees, he became one of about 60 who chose to serve in Syria. After returning to Afghanistan, he joined the Afghan Army.

Extensive ideological indoctrination is a central part of their service. Recruits are told the war in Syria is a defense of some of the holiest shrines of the Shiite faith from attack by the Islamic State — a group their recruiters then describe as a creation of the United States to destabilize the Middle East.

“My intention was Syria, to defend the shrine,” said the Afghan fighter who returned to his home in Yakawlang, and who wanted to be identified only by the name Abas.

Abas described his fellow Afghan fighters being pitched into battles that resembled the brutality of the Afghan civil war.

“You know how the Afghan boys fight — they wouldn’t even leave a chicken behind,” he said. “A unit leader would say, ‘We will capture this hill. What is in it for us? We want this much money.’ Three hundred people would go, 30 would come back.”

Other fighters described similarly heavy casualties. One said 15 of his comrades were killed on the first night they arrived at the front lines. And Jawed said there was a day when his unit lost 45 men.

“They tell you are defending the shrine of Zainab, and that is true: We believe in defending our religion and faith,” Jawed said. “But when you get there, you realize you have been brought to the slaughterhouse of a war of major powers.”

Afghanistan’s future hang in the balance