UPDATED: Norwegian police carried out what can only be called a sensational arrest Tuesday morning, seizing the wealthy husband of alleged kidnapping victim Anne-Elisabeth Hagen. She disappeared from the couple’s home northeast of Oslo in October 2018, and now her husband Tom Hagen has been charged with her murder. 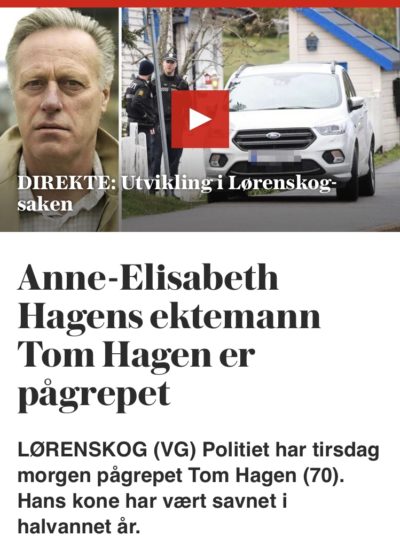 Newspaper, website and TV channel VG was at the scene when Tom Hagen was arrested and charged in his wife’s murder Tuesday morning. VG was also first to report the latest developments in a case that’s received wide coverage in Norway and frightened many, not least wealthy Norwegians who fear kidnapping themselves. Now police don’t think Anne-Elisabeth Hagen was kidnapped after all, and instead the victim of a pre-meditated murder. FACSIMILE: VG

Newspaper VG reported that police used several patrol cars to block local streets, with blue-lights flashing, in the Hagens’ neighbourhood in Lørenskog. Hagen’s car was stopped by police around 8:30am as he drove from his home in the direction of his business not far away, apparently while he was on his way to work.

Traffic was also halted in both directions on Nordahl Griegs gate in Lørenskog until a police car sped off with Hagen in it. VG noted that Hagen’s car was left parked along the roadside, empty.

Police wouldn’t immediately reveal any details about the arrest, but announced a press conference to reveal “the latest developments in the Lørenskog case” later in the morning. That’s when they announced that 70-year-old billionaire Tom Hagen, who’s featured on lists of Norway’s wealthiest people after making a fortune in the electricity and real estate businesses, has been charged with murdering his wife or contributing to her murder.

Police were also on the scene at Hagen’s company Futurum at Rasta, as was VG. Prosecutor Åse Kjustad Eriksson later said at the press conference that several properties tied to Hagen were being searched as part of a murder investigation that otherwise had gone on quietly for several months.

Hagen’s attorney Svein Holden, a former public prosecutor himself who went into private practice after handling the July 22 terrorist’s case, claimed he was tied up in a court meeting and could not comment on his client’s arrest. Eriksson later said Hagen has asked that Holden, who’d been brought in to represent the Hagen family after Anne-Elisabeth Hagen disappeared, now be appointed as his defense attorney. Holden, according to Eriksson, has said he won’t take any questions until he’s had a chance to speak with his client. 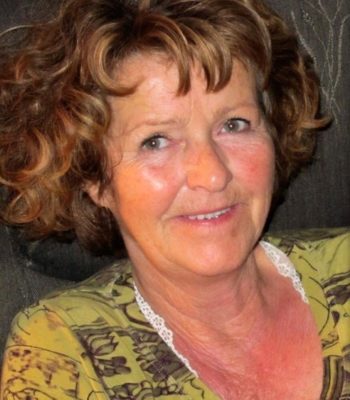 Police have distributed this photo of Anne-Elisabeth Falkevik Hagen, who disappeared from the Hagen home in Lørenskog in October 2018. Her husband Tom Hagen was arrested Tuesday morning and charged with her murder or contributing to it. PHOTO: Private

Tom Hagen’s wife of nearly 50 years disappeared from the family home on the morning of October 31, 2018. There were signs of a struggle in a bathroom at the home that borders a lake, police found a ransom note of sorts demanding payment in crypto currency, and they handled the case as a kidnapping.

Police also controversially kept the case under wraps until finally resorting to a public announcement of the alleged kidnapping at a press conference in January 2019. They had made little progress in their investigation, claimed they faced major difficulties in communicating with the alleged kidnappers over a complicated digital platform, and had kept the case quiet in the hopes of ultimately finding Anne-Elisabeth Hagen alive and well.

They later altered the course of the investigation, from a probe into a kidnapping with economic motives, to a murder in which Anne-Elisabeth Hagen was probably killed and that the assailants had covered up her death with kidnapping demands that weren’t serious. Tom Hagen was reported to have paid out millions after receiving threats that she’d be killed, but police later decided that threats left behind at the family home were meant to mislead the investigation.

VG had since reported that a central police theory was that Anne-Elisabeth Hagen was the victim of a pre-meditated murder that had been planned for at least five months. Tom Hagen has reportedly been cooperative throughout the investigation, with VG also reporting that he has had theories that his wife’s disappearance was meant as an attack on him personally. 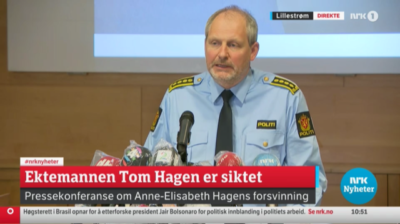 On Tuesday all that changed again, when the police arrested him, charged him in the murder and publicly revealed that suspicions Hagen was involved in his wife’s disappearance had been rising for months. Police inspector Tommy Brøske said at Tuesday’s press conference that he and his colleagues no longer think there was any kidnapping, nor were there ever any real negotiations for Anne-Elisabeth Hagen’s release.

It remained unclear why police chose to act on Tuesday morning. Prosecutor Eriksson wouldn’t comment on the timing of Hagen’s arrest, saying only that it was “an operative” decision. She added, however, that police were entering “a new, intensive phase” of a “demanding investigation” that was at “a very early stage.” She said a “collective picture of the evidence” led to Hagen’s arrest, that police want to question him further, and that several searches were already underway of his properties to secure more evidence. 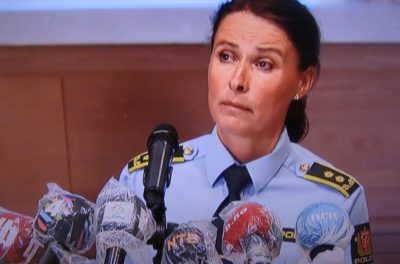 Eriksson also indicated there may be more arrests of possible accomplices and that they were still looking for Anne-Elisabeth Hagen, presumably her body or remains. “It’s important to find her,” Eriksson said.

Newspapers Dagbladet and Dagens Næringsliv (DN) have earlier reported that Tom Hagen, who’s originally from Hadeland, made his initial fortune through real estate development where the E6 highway now runs through Lørenskog and, later, the development of the Kvitfjell ski center that was built for the men’s alpine competition at the Winter Olympics in 1994. Hagen guaranteed its use after the Olympics, laying the foundation for its transformation into a holiday destination where he rented out overnight accommodation, cafés and other services and backed building activity that has led to more than 1,000 hytter (cabins) and condominiums in the area. “This has created lots of jobs in Ringebu,” former mayor Erik Winther told Dagbladet.

In addition to real estate development and property ownership in Lørenskog, Oslo, Fet, Lillehammer and Ringebu, Hagen also owns 70 percent of the electricity company Elkraft, a former tenant in one of his modest commercial buildings. DN reported that Elkraft was founded by Marius Nerbye in 1992 when the electricity market was being liberalized, and it aimed to deliver electricity at a set price to businesses. Hagen became a customer, understood how lucrative the business could be and bought up much of the shares held by Nerbye, who still holds 30 percent. Elkraft has since expanded throughout the Nordic region and delivered NOK 200 million in dividends to Hagen. Nerbye told DN on Tuesday that he was “shocked” by Hagen’s arrest, calling it “tragic” but adding that Hagen has never been involved in Elkraft’s operations.

Magazine Kapital has set Hagen’s personal fortune at nearly NOK 2 billion. Hagen, who also has suffered losses over the years on stock investments and at Kvitfjell, himself has rarely granted any interviews. He told local newspaper Romerikes Blad in 2008, however, that he’d really only been concerned with creating “a secure job” for himself “during 40 years of work. That’s where the motivation lies. The fact that I’m rich isn’t something I think about.” His taxable fortune at the time had been set at NOK 286 million, NOK 60 million higher than the year before.

His wife Anne Elisabeth was listed as a board member of several of his companies, and as a substitute member until a month before her disappearance in 2018. DN reported Tuesday that their eldest daughter has recently had a more central role in the businesses and sits on several boards of her father’s firms. Two other siblings have also held board posts. No family members have ever displayed lavish lifestyles in line with Hagen’s wealth, and DN reported he has not passed on ownership stakes or wealth, but arranged that they would be able to take over his shares.

Tom Hagen faces a custody hearing on Wednesday, at which police and prosecutors will ask that he be held in jail for at least another four weeks while they continue to investigate the case.