Pakistan (CNN)Manzoor Ahmed Pashteen, a 24-year-old ethnic Pashtun, was just a child when the US-led war on terror began, and it wasn’t long until it was on his doorstep.

He said his family, who live in Pakistan’s north-western region, close to the Afghan border, first heard the name “Taliban” in 2004. By the end of the year, with fighting intensifying, his family was forced out of their village, Sarwakai.
The following year “the situation became such that whenever an elder spoke out against the war they would suddenly disappear.”
Pashteen has accused the military of allying with the Pakistani Taliban — an almost-sacrilegious accusation in a country where the military is counted among the strongest and most trustworthy of institutions.
“Ask them: Who they are harboring in their cantonment zones, if not the Taliban?” Pashteen tells CNN, referring to the security forces’ military stations.
The military and intelligence services have responded to repeated requests from CNN for comment by saying they are “not available to comment.”
His suspicions are not unique in the remote Federally Administered Tribal Areas (FATA), where years of war and violence have left villages destroyed and lives ruined by militant violence and heavy-handed government interference, which often leads to what they see as indiscriminate killing and arrests.
The military has long denied claims of links to armed groups. It has also rejected allegations of involvement in extrajudicial killings and abuses in its long-running war against militants in the tribal region.
It’s against this violent backdrop that a new generation of young men and women have emerged with a renewed call for justice.
Pashteen, a charismatic speaker and a defender of the Pashtun ethnic group, has been thrust into the spotlight as leader of this new movement.
On Sunday Pashteen will address what could be his largest crowd yet, in Karachi, home to the country’s largest urban Pashtun population. 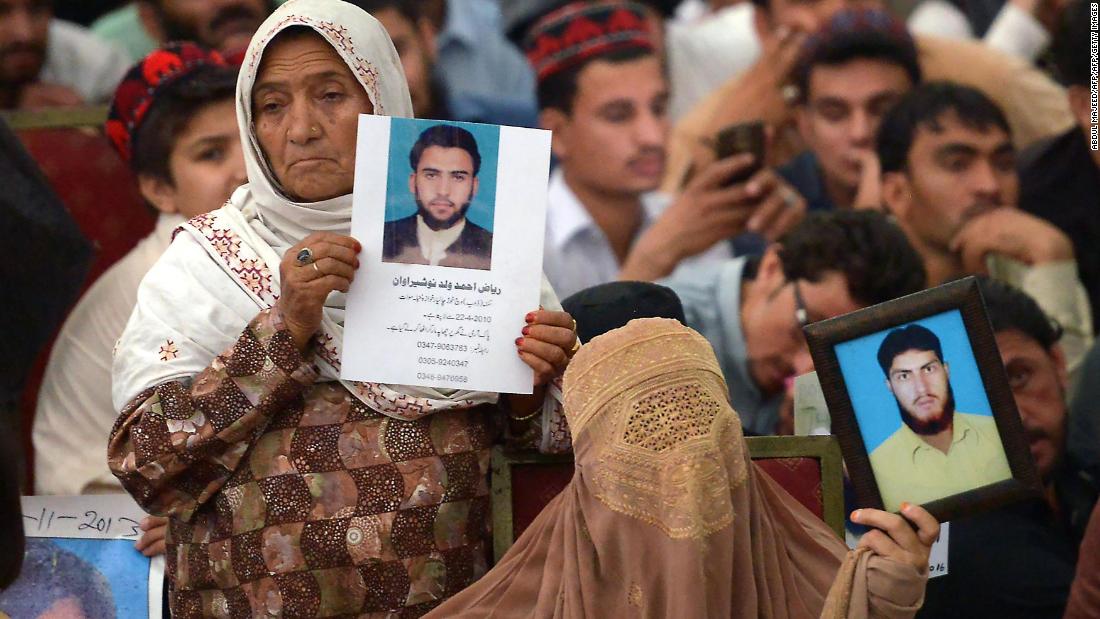 Pakistani demonstrators from the tribal Pashtun Protection Movement (PPM) hold pictures of missing family members during a rally in Peshawar.

Birth of a movement

What started off as a conversation among students leaders at Gomal University in Pakistan’s Khyber Pakhtukhua (KP) province in 2014, quickly became its own organization, the Pashtun Tahafuz Movement (PTM) — “tahafuz” means protection in Urdu.
But it wasn’t until January 2018, following the death of Naqeebullah Mehsud, an aspiring model who security services killed as part of a raid on a group of militants aligned with Tehrik-i-Taliban Pakistan (TTP) — the Pakistani Taliban — that the movement really began to gather momentum. 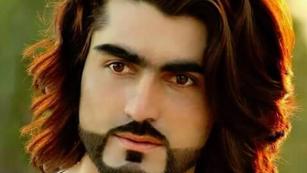 Naqeebullah Mehsud, the model killed in a security raid on suspected militants. He was subsequently cleared of involvement with any militant group.
Senior police officials later conceded after an investigation that Mehsud had no ties to militancy.
After three months of sustained outrage, a local police superintendent was arrested in connection with the killing. The case against him is currently ongoing.
Mehsud’s death gave rise to a series of PTM organized rallies throughout the country, later dubbed the “Pashtun Long March.”
At PTM rallies, thousands of men, women and children hold aloft photos, ragged Polaroids and tattered birth certificates from their missing relatives, hoping that this young man’s swaggering charisma can somehow bring their loved ones home.
The movement — which is committed to nonviolence — is demanding authorities confront accusations of involvement in the death and disappearance of hundreds of Pashtuns in FATA, and guarantee rights for the 30 million tribespeople that make up the minority group. 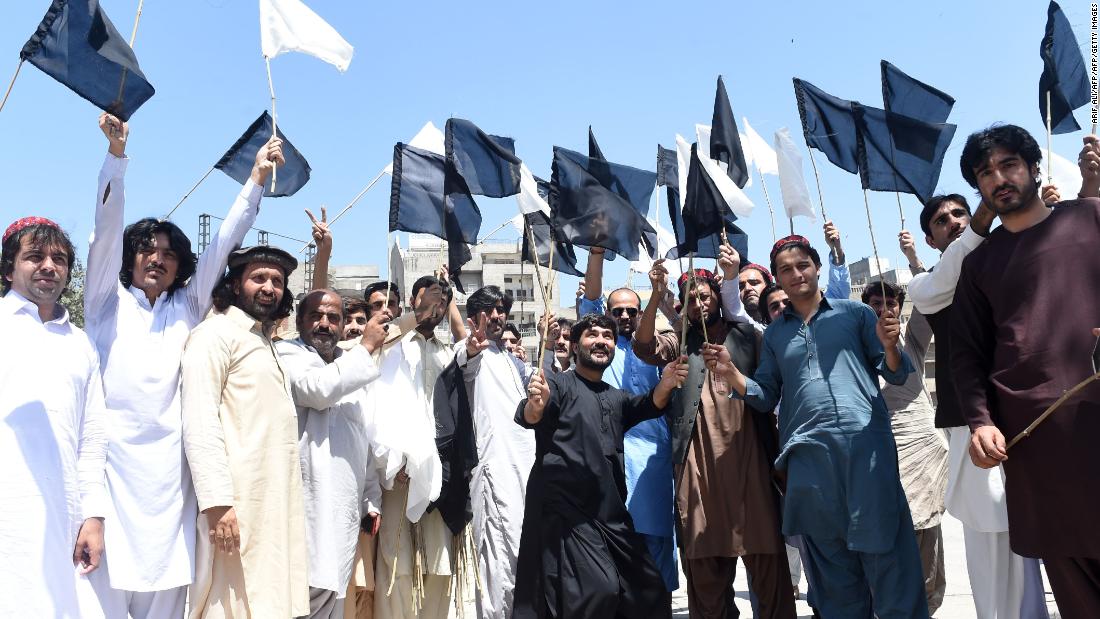 Members of the Pashtun Protection Movement (PTM) and student activists gather before the start of a demonstration in Lahore on April 22, 2018.
The PTM is also demanding the removal of checkpoints and land mines from FATA areas and compensation for property destroyed in the course of Pakistan Army offensives in the region.
“These demands appeal to a fairly broad section of the Pakistani population, as they are about fundamental fairness,” says Barnett Rubin, a senior fellow and Associate Director for the Center on International Cooperation, where he directs the Afghanistan Pakistan Regional Program.

‘We don’t back down’

When CNN meets Pashteen at an undisclosed location — he fears for his own safety — he is, as ever, wearing his distinctive, embroidered red-and-black hat.
The headgear, which he exchanged with a shepherd for the one off his own head, has itself has become a powerful symbol, to the point where similar style hats have been banned from at least one university.
He eats walnut cake while quoting popular Bollywood songs to prove his points, and is direct when it comes to his convictions.
“I come from a family that sees through the things we begin,” he says. “We don’t back down halfway.” 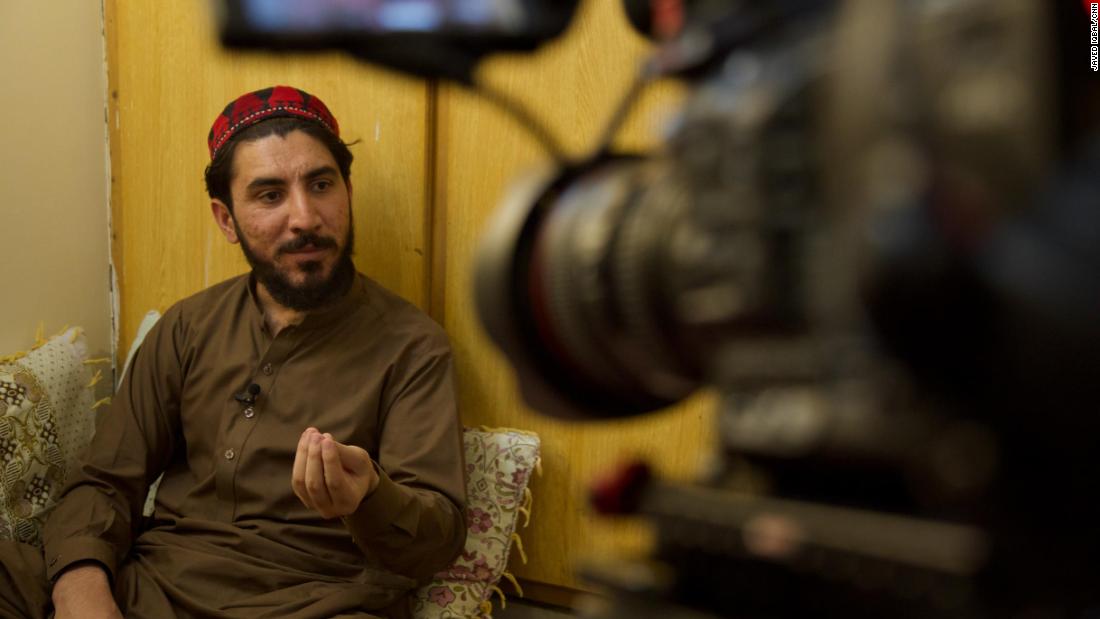 Activist Manzoor Pashteen, seen during a CNN interview in May 2018.
As the protest in Karachi looms, there has reportedly been a crackdown on PTM activists — local media reports that over 150 have been booked on sedition and terror charges ahead of Sunday’s march.
At a press conference on Friday, Sindh Home Minister Sohail Anwar Siyal said that due to threats to the rally he had canceled permission for PTM to hold it at its planned location, and would restore permission if the group relocates to a “safer place somewhere else in Karachi.”
According to a report published in early 2018 by the Human Rights Commission of Pakistan, in 2017, the number of “enforced disappearances” — those linked to actions by security forces — in the country “continued to pose a real threat for human rights.”
The commission alleges there are 867 people missing from KP province alone. 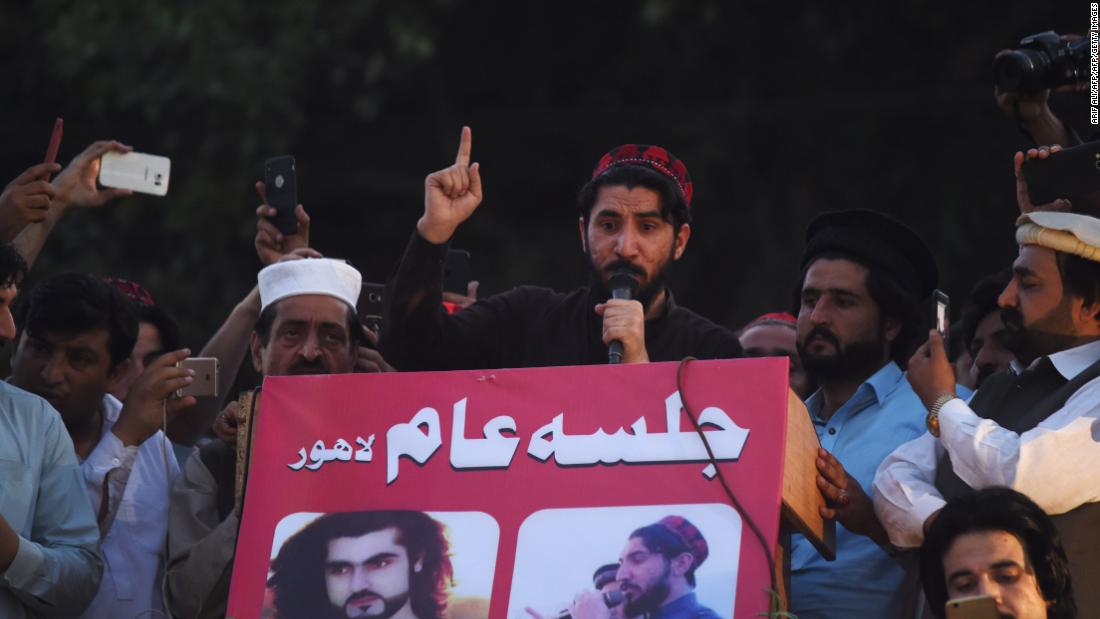 Manzoor Pastheen, the leader of Pakistan’s Pashtun Protection Movement (PTM) speaks during a demonstration in Lahore in April 2018.
While the PTM concedes that some of those killed or missing are insurgents, they insist those in custody should have their day in court.
“We agreed that there were Taliban in our area, and we also admit that local people were involved with them, and yes that suicide bombers were recruited from that area — but not all of us,” Pashteen says.
“Ninety-five percent of Pashtuns have been affected (by the war) … you can’t paint everyone with the same brush,” adds Pashteen. 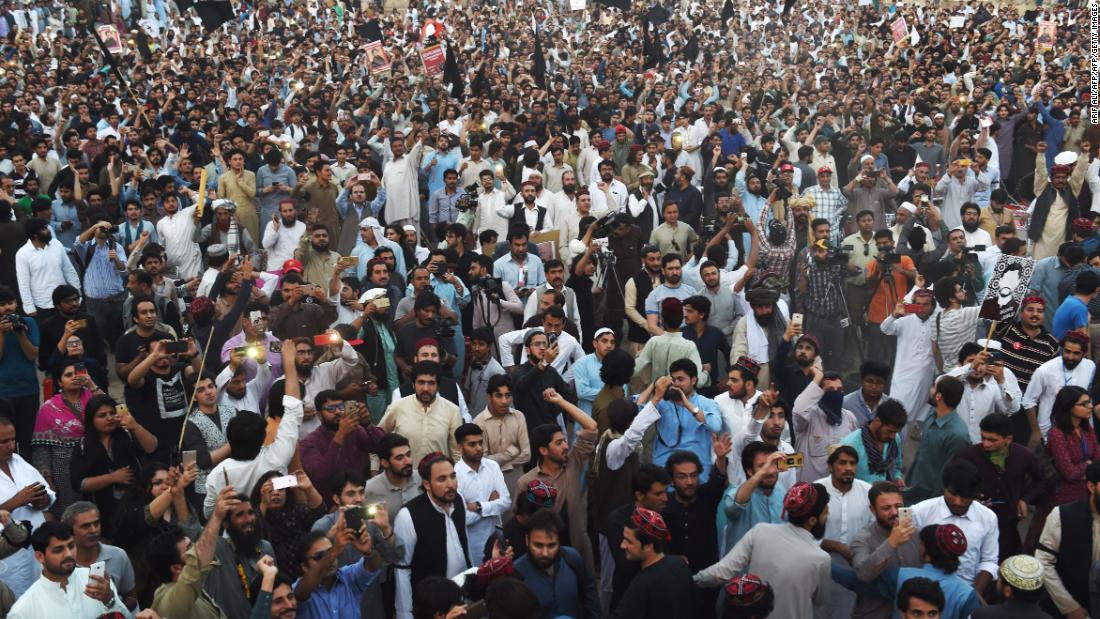 Thousands of protesters defied officials by attending a rally organised by Pakistan’s Pashtun Protection Movement (PTM) in Lahore on April 22.

Pashtuns flock to the cause

Despite a rush of support to the PTM from a wide spectrum of Pakistanis there have been tangible stirrings of unease at some of the language used by the group.
Nida Kirmani, an associate professor of sociology at the Lahore University of Management Sciences, argues that the PTM has rattled the establishment, homing in on what she describes as a “crisis of democracy” in Pakistan.
However, retired brigadier Asad Munir, a former Inter-services Intelligence (ISI) officer who was station chief in various parts of the country between 1999 and 2004, including a posting in FATA, says that he feels that the military’s own losses during counterinsurgency operations in the country’s northwest should not be overlooked.
“With 6,000 soldiers killed and many lives disrupted, and after finally wresting back control of the region, the army will simply will not tolerate anything that they feel could lead to the destabilization of FATA,” says Munir.
Munir also has questions regarding the group’s finances.
“Who is funding them?” Who is paying for all this travel, all the logistics, where are the funds coming from?” he asks.
Pashteen is quick to shrug off any insinuation that they are being funded by external groups.
When pressed for a response to questions from CNN regarding funding, he remains vague. “We all get by, things just happen,” he says, pointing to the fact they collect money from supporters during rallies and from the Pashtun diaspora.

The movement has caused a regional stir, and has become a focal point in ongoing tensions between Pakistan and neighboring Afghanistan, which have endured worsening relations due to an increase in attacks in Kabul which Afghan officials have linked to Pakistan-based militants. Islamabad has refuted the claims.
The most visible indication of support came from Afghan leader Ashraf Ghani, who tweeted in February: “I fully support the historical #PashtunLongMarch in Pakistan. The main purpose of which is to mobilize citizens against fundamentalism and terrorism in the region.”

I fully support the historical #PashtunLongMarch in Pakistan. The main purpose of which is to mobilize citizens against fundamentalism and terrorism in the region.

1,972 people are talking about this
However, the endorsement led to accusations from within Pakistan that Pashteen was a stooge supported by foreign entities.
“The movement’s opponents in Pakistan try to use (foreign support) against it to argue it is inspired by foreign intelligence agencies — of Afghanistan, India, and the US,” says Rubin, the US-based analyst. “So the Afghan government has to be careful.”

The 24-year-old says he is making the security services jittery, and it can be seen in media coverage — or the lack thereof. The journalism advocacy group Reporters Without Borders issued a statement last month accusing the military of censorship, but the military has denied being behind any clampdown.
“The latest subject to be placed off limits is the Pashtun (Protection) Movement, which has been organizing protests in defense of Pakistan’s Pashtun minority and denouncing human rights violations by the military targeting Pashtuns,” the statement read.
Pashteen sees the military’s alleged actions as tactics of yesteryear and says they are proving less and less effective in the age of new media.
“They can use all the propaganda they want against us but at the end of the day we will continue to post whatever we like on social media,” he says.
Confronting this social media agility is “a new situation for the Pakistani military, and it doesn’t seem sure how to proceed,” Rubin says.
As the country gears up for an election, Pashteen maintains he doesn’t have any desire to enter into politics — he just wants to raise awareness and hold his government’s armed forces and intelligence services to account.
“I simply want to go back to my anonymous life, once our demands are met, do my PhD and become a professor,” says Pashteen, who is a trained veterinary surgeon.
There is a Pashto saying, Pashteen tells CNN, “that there is betterment in silence.”
But for now, he says he is determined to be anything but silent as he and his supporters fight to have their voices heard.