A Norwegian man accused of carrying out a shooting at a mosque near Oslo in August and murdering his stepsister denied guilt on both counts as his trial opened in Norway.

Prosecutor Johan Overberg read out the charges separately on Thursday. When asked by the judge how he pleaded on each count, Philip Manshaus said he did not admit guilt.

The 22-year-old made an OK gesture, an expression of white supremacy, with his hand before taking his seat. The proceedings were broadcast via video link due to the coronavirus pandemic.

Her body was found at his home in Baerum, west of Oslo on August 10, the same day as the mosque attack.

No one was shot or seriously injured at the al-Noor Islamic Centre mosque, where Manshaus, who had arrived at the place of worship with several weapons, was overpowered after a struggle with two members of the mosque.

However, he was able to fire six shots and injured one elderly worshipper. 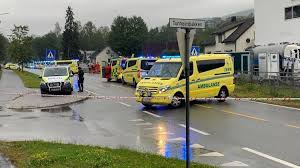 Police have concluded that he acted alone.

Before the attack, al-Noor Islamic Centre implemented extra security measures following the massacre of more than 50 people at two New Zealand mosques in Christchurch by a self-declared white supremacist.

Norway was the scene of one of the worst-ever attacks by supporters of the far right in July 2011, when 77 people were killed by Anders Behring Breivik.

Breivik said he was motivated by his hatred of multiculturalism, and detonated a massive bomb after which he opened fire on a gathering of the Labour Party’s youth wing on the island of Utoya.