Pashtuns’ struggle for rights cannot be silenced through violence

Arif Wazir, one of the leaders of the Pashtun Tahafuz Movement (PTM), was fatally shot near his home in South Waziristan, Pakistan on May 2, 2020 [Wikimedia Commons]

The murder of PTM leader Arif Wazir, and the Pakistani state’s reluctance to solve it, only strengthened our resolve. 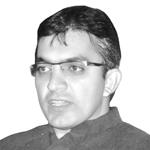 On May 1, Arif Wazir, a politician, activist, and one of the leaders of the Pashtun Tahafuz Movement (PTM), was shot by “unidentified men” near his home in Wana, South Waziristan. He was swiftly rushed to a local hospital and then transferred to a larger hospital in Islamabad for life-saving treatment, but his wounds ultimately proved fatal and he died early on May 2.

Arif’s murder was only the latest in a series of attacks against our movement, which is working to uproot illegal armed groups from the former Federally Administered Tribal Areas (FATA) of Pakistan and hold the Pakistani military to account for the crimes and human rights abuses it committed against our people, the Pashtuns, in its war against these groups.

Arif’s killing devastated us, but it did not harm our resolve to bring justice to our people. On the contrary, it reinvigorated our struggle for rights, equality, and accountability.

Despite concerns about the coronavirus pandemic, tens of thousands of people attended Arif’s funeral in his hometown of Wana on May 3. The unprecedented turnout had a clear underlying message: We will resist any attempt to silence our plight.

In the days following his funeral, supporters of the PTM protested against his murder in Pakistan, Afghanistan, and around the world. They called on the Pakistani authorities to arrest and prosecute the perpetrators. More significantly, they reiterated our demands for an end to illegal killings and forced disappearances by the security forces, the removal of landmines, and the right to live peaceful and dignified lives in our historic homeland.

The response, however, was telling. To this day, no civilian or military official has publicly condemned Arif’s murder. No one has extended us any sympathy or given us assurances that the crime will be investigated.

Instead, hours after his shooting, online “trolls”, who usually run covert social media campaigns for the military, began a vicious propaganda campaign against Arif and our movement. Among other unfounded accusations and outright lies, they blamed Arif’s first cousin and fellow legislator, Ali Wazir, for his murder. Even the verified Twitter account of the media team working for the governor of Punjab province – Pakistan’s most populous region which is governed by Pakistani Prime Minister Imran Khan’s party, PTI – peddled such lies.

While that particular tweet was retracted the next day, no apology was offered and no one was punished for the smear. Apart from a few English-language dailies, state and private media outlets largely censored the killing.

The manner in which Arif was murdered was strikingly similar to the killings of hundreds of Pashtun tribal leaders and politicians in Waziristan and other parts of the former FATA over the past 20 years.

This assassination campaign began in the aftermath of 9/11 when Pakistan allowed Taliban fighters and other allied fighters who were forced to flee Afghanistan to resettle in parts of former FATA. Over the years, these groups systematically eliminated tribal leaders and politicians who raised their voices against them. To this day, the Pakistani state has not solved any of these murders, perhaps because it has been tacitly using these unlawful groups to foment instability in Afghanistan and consolidate its influence over the region.

Arif Wazir and I came of age at the height of this vicious war. We saw the destruction of our way of life and mass killings of civilians both in terrorist attacks and military operations. We witnessed the targeted assassinations of our elders by known groups and individuals who are only “unknown” to our state. These same elders had fought against the armed fighters on the government’s behest for years. But the state repeatedly failed to deliver justice for them.

In 2018, the state merged FATA into Khyber Pakhtunkhwa, effectively abolishing the draconian colonial-era regulations that these districts had been governed under for decades and making its five million residents equal citizens of the Pakistani federation.

This move initially gave Pashtuns some hope that they could finally enjoy full citizenship rights and protections. But, despite this landmark constitutional change, our suffering did not come to an end.

Unfortunately, today the Pakistani state appears willing to allow our region to descend into chaos once again.

As the United States prepares to leave Afghanistan, some influential figures in the Pakistani military seem hellbent on triggering another round of conflict in the country to consolidate the Taliban’s power there and expand Pakistan’s influence over the region. To achieve this, they will once again need to allow the armed group to use Waziristan and other Pashtun areas near the Afghan border as launching pads for their illegal activities.

For months, I have been warning, alongside other PTM leaders, against the revival of the Taliban in Waziristan. Ali and I even raised this issue on the floor of the National Assembly, the lower house of the Pakistani Parliament. But instead of listening to our warnings and complaints, the state machinery chose to declare us “unpatriotic” and “anti-state”.

In our view, Arif – just like hundreds of other tribal leaders, politicians and activists before him – was killed as part of a larger conspiracy to end our peaceful resistance and revive Taliban control in former FATA.

But we are determined to protect our homeland from the Taliban’s bloodshed and the Pakistani military’s deadly strategic games. Peace inside the country and in the region is in the best interest of Pakistan. But for peace to return and nourish, the senseless games of Pakistani generals must end. We will not be silenced by the state’s attempts to paint us as “unpatriotic”. We will not allow unlawful detentions, forced disappearances, beatings, threats and even murders by “unknown assailants” to silence our plight. We will continue our fight until our homeland is free of military oppression and illegal armed groups, and the perpetrators of Arif’s murder are behind bars.

The views expressed in this article are the author’s own and do not necessarily reflect Al Jazeera’s editorial stance.

Mohsin Dawar is an elected member of Pakistan’s national parliament and a leader of the Pashtun Tahaffuz Movement (PTM).