First batch of jets purchased by New Delhi in a controversial multibillion-dollar deal to reach India on Wednesday.

The first five of a batch of French Rafale fighter jets purchased by New Delhi in a controversial multibillion-dollar deal are headed to India for rapid deployment amid rising tensions with China.

The deal, estimated to be worth $9.4bn, has been shadowed by corruption allegations levelled by the opposition Congress party, though Prime Minister Narendra Modi has rejected the claims.

The jets – built by Dassault Aviation – were piloted by Indian Air Force (IAF) officers as they took off from Merignac in southwest France, the company said in a statement.

By Wednesday, the five planes should be at the Ambala airbase in northern India, some 200km (125 miles) from the Pakistani and Chinese borders.

They will refuel midair several times on the way, and will also make a stopover in Al Dhafra in the United Arab Emirates, where France has an airbase. 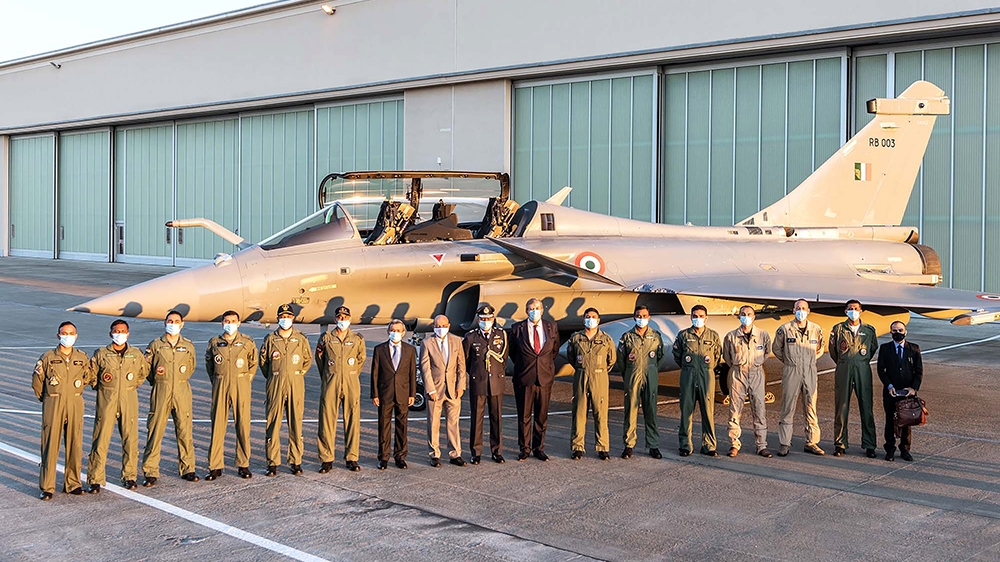 Delivery of the Rafale jets – 36 of which were ordered by India in September 2016 – officially began in October, but the planes stayed in France for the training of the pilots and mechanics.

Delivery should be completed by 2022.

“I am extremely impressed by the efficiency and unfailing determination of the Indian Air Force and Indian Ministry of Defence,” chief executive of Dassault Aviation, Eric Trappier, said in a statement.

He added that in spite of the COVID-19 pandemic, they had managed to “rapidly master all aspects of the Rafale in order to reinforce Indian sovereignty and contribute to the protection and security of the Indian people”.

The planes are awaited with impatience by New Delhi, which is eager to update its ageing fighter jet force as tensions flare with both China and Pakistan.

Hand-to-hand fighting between Chinese and Indian forces in the Galwan Valley in Ladakh last month left 20 Indian soldiers dead. China has said it also suffered casualties but has not given figures.

Tensions are also running high with Islamabad after India scrapped the semi-autonomous status for the Muslim-majority region of Indian-administered Kashmir and imposed a major security clampdown.

The IAF said once the planes arrive in India, “efforts will focus on operationalisation of the aircraft at the earliest”.