Norway’s recently embattled military intelligence agency is pointing once again to Russia and China as posing the biggest defense threats. Both continue to move in a more authoritative direction, according to the agency whose chief, Morten Haga Lunde, is especially worried about Russia’s new long-distance missiles.

“The factors that, to the greatest degree, influence the threat … to Norwegian interests come from Russia and China,” Lunde, head of the agency known as E-tjenesten, claimed on Monday when he delivered its annual security assessment.

Lunde spent most of his presentation talking about Norway’s large neighbour to the east and its neighbour farther east. He said the intelligence agency he now heads has seen the alleged threat from both Russia and China develop over the past 10 years.

“Russian and Chinese intelligence agencies are intervening in all sectors of society,” Lunde said. “This is not a transition phase. The Russian and Chinese systems are different, but both are moving in a more authoritative direction.”

He noted how Russia has strengthened its military bases on the Kola Peninsula and in the northern portion of the Barents Sea, where they’re carrying out more and bigger military exercises than ever before. Russia is also developing new and more advanced weapons systems, with Lunde telling Norwegian Broadcasting (NRK) that some of Russia’s so-called “super weapons” have been tested in areas close to Norway. 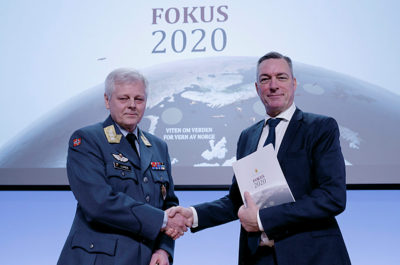 “Is Norway isolated in the world? No,” Lunde told NRK, adding that Norway is “part of a globalized system and a western system,” not least through its membership in NATO. Russia’s weapons nonetheless “pose a threat for Norway. There’s a danger Norway can land behind Russian lines, and with increased capacity it can be difficult to prevent that from happening.”

Lunde’s E-tjenesten, meanwhile, has been under harsh criticism since one of its alleged couriers landed in a Moscow prison two years ago. Retired border inspector Frode Berg was finally freed last fall as part of a spy swap and recently granted several million kroner in compensation. Both E-tjenesten and Norway’s police intelligence agency PST have also been sued by a Norwegian company whose owner claims it lost a major contract in Russia because of the two spying agencies’ “clumsy” recruiting attempts.

State defenders claim both agencies were simply doing their jobs, while a senior office and instructor at Norway’s military academy, Geir Hågen Karlsen, wrote in newspaper Dagens Næringsliv (DN) on Monday that Russian intelligence is using the Frode Berg case to create internal divisions in Norway and undermine both E-tjenesten and PST.

While Chinese leaders have been distracted recently by the Wuhan virus and embarrassing protests of their efforts to exert authority over Hong Kong, Russia has recently challenged Norway’s authority over the Arctic islands of Svalbard. Defense Minister Frank Bakke-Jensen of the Conservative Party told NRK on Monday that it was important to take all threats from Russia seriously.

Asked whether it will be necessary to improve Norway’s mobilization ability, Bakke-Jensen said “we are building up our defense every day and are in the midst of a long-term plan.” He also called for more “international cooperation” regarding weapon control and disarmament.

He repeated earlier claims that Russia’s extensive military exercises off the coast of Norway are “unnecessary” and too close to Norwegian borders. “Being good neighbours means that both parties have consideration for one another. I have expressed dissatisfaction with some of the exercises by Russia.”

Lunde noted, meanwhile, that China has a goal of matching the US’ military might by 2050. He also warned of Chinese spying efforts, ambitions and capacity so far. “It’s difficult to exaggerate what that can mean,” Lunde said.

Seasonal workers from Romania have arrived in Norway

WHO virus study starts in Norway