With the traditional children’s parades and large gatherings cancelled by Corona infection fears, Norwegians were mostly encouraged to spend the 17th of May at home. That’s where many celebrate with friends and family anyway, at festive breakfasts and lunches, and groups of up to 20 are now allowed as long as everyone says a meter apart.

At precisely 1pm, however, national television channels NRK1 and TV2 were set to broadcast canons firing in a national salute from the Akershus Fortress in Oslo. Right after that, everyone from Kirkenes in the far northeast to Kristansand in the southwest were urged to sing along with verses one, seven and eight of the national anthem Ja, vi elsker, from their living rooms, balconies or out on the street, accompanied by the King’s Guards’ music corps and the choir Det Norske Solistkor playing live from the grounds of the Royal Palace.

No royal waving to the masses
Word leaked out that there will be a national 17th of May event on the grounds of the Royal Palace, from which NRK rigged up for broadcasting. The area where the country’s biggest parade passes under the palace balcony (Slottsplassen) was, however, closed to the public on Sunday. Health Minister Bent Høie made it clear at midweek that “we want the area around the palace to be as empty of people as possible,” an historic departure from more than 75 years of huge 17th of May celebrations that attract tens of thousands of dressed-up Norwegians waving flags at the Royal Family on the balcony.

Until Corona came along, only World War II had ever halted Norway’s 17th of May parades that began in 1870. The Royal Family has been represented on the balcony of the palace since 1906, the first 17th of May after Norway broke out of its unhappy union with Sweden in 1905 and re-established its own monarchy. There was one year when the former King Haakon VII was away at a funeral, and Nazi German occupiers banned 17th of May celebrations after their invasion in 1940 until their surrender just a week before May 17, 1945. King Haakon was too ill to appear on the balcony just before he died in 1957 but his son King Olav V appeared, also while ill himself in 1990 on his last 17th of May before he died in January 1991.

Olav’s son King Harald V hasn’t missed a 17th of May accompanied by his family on the balcony. He’s now 83 and was ill last winter, but has addressed the nation during the Corona crisis, spoke at last week’s scaled-down events on Liberation- and Veteran’s Day, and is widely expected to appear somewhere. 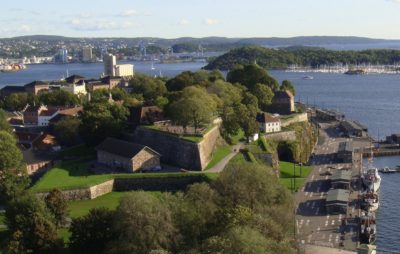 Amidst all the secrecy surrounding 17th of May events this year, one thing was clear: canons would be fired from the walls of the historic Akershus Fortress in Oslo in a national salute at 1pm on Sunday, followed by a chance for everyone to sing the national anthem from their homes, gardens, balconies or out on the street. PHOTO: newsinenglish.no

In the midst of all the secrecy around official events, NRK and TV2 planned to cover various morning wreath-laying ceremonies around the country and in Oslo, not least at the graves of national heroes at the Vår Frelsers (Our Saviours’) cemetery. There would also be sporadic “pop-up” parades by small marching bands through neighbourhoods and downtown areas, none of which were announced in advance.

A parade of boats led by Norway’s tall ship Christian Radich around the inner Oslo Fjord was, however, announced in advance, along with convoys of veteran vehicles decorated for the occasion that were scheduled to leave from Skullerud, Kalbakken and Hovseter in Oslo at 11am.

“Pop-up” folk dancing was also expected in Oslo and other Norwegian cities between noon and 3pm. Members of the public encountering the spontaneous displays were invited to join in as long as distances of a meter were respected.

Many restaurants that finally were allowed to reopen last week have planned special 17th of May meal serving, but seating was limited because of ongoing Corona restrictions.