US defence chief opposes use of military to quell unrest

United States Defense Secretary Mark Esper said on Wednesday that he does not support invoking the Insurrection Act to deploy active-duty forces to quell civil unrest, and added that he regretted using the word “battlespace” to describe areas gripped by protest.

Esper also said he was unaware that he would be part of President Donald Trump’s politically-charged photo opportunity on Monday when law enforcement forcibly cleared a park outside the White House of peaceful protesters so the president could take a picture in front of a church while holding a Bible.

Speaking to reporters at the Pentagon, Esper said active-duty troops in a law enforcement role should be used in the US “only in the most urgent and dire of situations”, adding, “We are not in one of those situations now.”

Use of the Insurrection Act has been discussed as Trump has talked about using the military to quell violent protests in US cities. Esper has authorised the movement of several active-duty Army units to military bases just outside the nation’s capital, but they have not been called to action.

In his Pentagon remarks, Esper strongly criticised the actions of the Minneapolis police, in whose custody George Floyd died after an officer held his knee to Floyd’s neck for nearly nine minutes. Esper called the act “murder” and “a horrible crime”.

Esper further distances himself from WH after Monday embarrassment, saying he does not support invoking Insurrection Act against protestors as Trump has threatened to do

462 people are talking about this

Esper’s comments come after reports that Pentagon officials are increasingly uneasy about the more prominent role the US military is playing in the Trump administration, not only during the most recent unrest but also in earlier domestic missions such as border security and law enforcement.

“There is growing concern that this is not good for the role of the military going forward,” an unnamed US Department of Defense official told the Politico news outlet. “Now you’ve injected the military into a moment in a political way. It just doesn’t seem right.”

Trump also came under fire in the pages of The Atlantic magazine from retired Admiral Mike Mullen, who served as Chairman of the Joint Chiefs of Staff during the administration of former President Barack Obama and is widely respected within military circles. Mullen wrote that he has been hesitant to speak out on issues related to Trump’s leadership until now, but “we are at an inflection point, and the events of the past few weeks have made it impossible to remain silent”.

“Whatever Trump’s goal in conducting his visit,” Mullen wrote of the president’s Lafayette Square photo opportunity on Monday, “he laid bare his disdain for the rights of peaceful protest in this country, gave succor to the leaders of other countries who take comfort in our domestic strife, and risked further politicising the men and women of our armed forces.”

On Monday, 715 soldiers from the 82nd Airborne Division arrived in the Washington, DC area in case the situation worsened in the capital. They are stationed at Joint Base Andrews in Maryland and Fort Belvoir in Virginia. Two more 82nd Airborne battalions, totaling 1,300 soldiers, are on standby at Fort Bragg in North Carolina, according to documents reviewed by the Associated Press news agency, in an operation that has been named “Operation Themis”.

Trump on Wednesday defended his decision to deploy troops to the capital, saying the massive show of force is a model for states to follow as they attempt to quell the nationwide unrest.

In an interview on Fox News Radio on Wednesday, Trump argued that the show of force was responsible for protests in Washington, DC and other cities turning more calm in recent days, and he repeated his criticism of governors who have not deployed their National Guard soldiers to the fullest.

“You have to have a dominant force,” Trump said in the interview. “We need law and order.”

Block after block of midtown 5th Avenue – perhaps the most famous shopping street in the world- look like this now. The vandals made their way down this street, unbothered by police, and shattered countless windows doing millions of dollars of damage and theft 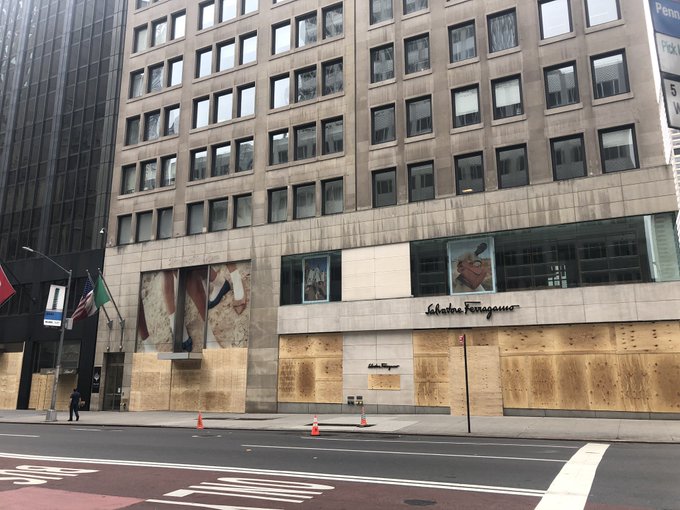 17.5K people are talking about this

On Tuesday evening, the nation’s streets were calmer than they have been in days since Floyd’s killing set off mostly peaceful but sometimes violent demonstrations over police brutality and injustice against African-Americans.

Earlier curfews and efforts by protesters to contain the lawlessness were credited with preventing more widespread damage to businesses in New York and other cities overnight on Tuesday.